Word Vomit: How I Got Out of My Head and Onto the Page

Hi, I’m Chris Hendricks, the writer of Anomaly23 and host of the ComixCentral Podcast Adventures in Interviewing.

I’ve always had a passion for writing, and heroes, not necessarily in that order.  I never got into comics as a medium, because I was too busy reading the Star Wars canon.  For that, I will never apologize.

I was diagnosed with Cerebral Palsy as a kid.  Basically, god the universe or fate (whatever you decide) didn’t want me running into burning buildings, so I decided my best course of action was to save the world via storytelling.  It’s truly a wonder what wonder can do.

Every story, in my opinion, starts with a question.

A question the writer has almost an excruciating desire to answer.  I say this only because, as many of you may already know, writing is torture.  So the question better be worth the pain.  The question is the catalyst for any creative outlet, but how you choose to answer is the fun part.  My question was, “How do I tell my story to my fellow fractured brothers and sisters, while at the same time connecting to a wider generic audience without coming across as an afterschool special rip off of Forrest Gump?”  My answer was a comic book called K vs K.  It’s not finished, but it’s alive.

Like most ideas that survive the ever-bullying ego, mine was and is very flexible.  It started out as a manifesto to people with disabilities.  A rulebook of sorts for how we should carry ourselves as a minority in order to be seen and respected the way we desire to.  The idea later turned into a graphic novel as a result of collaboration.

The idea started off fine until I ran into my first problem.  It wound up sounding like a mixture between a set of standards and personal experiences.  The audience didn’t know whether I was talking about myself or giving them directives as to how to live their lives.  I have no interest in dictating the lives of others.  Politics isn’t my game.

A friend of mine suggested that, rather than write a memoir or manifesto, I create a character.

The character could go through experiences, and learn the lessons I did in various ways.  This gave me a tremendous sense of relief and freedom.  I could stay true to my own experience, but be truly creative with the environment around those experiences.

As a result of this limiting moment I’ve learned this: if you know how your main character feels, a world is easier to come by.

With this revelation, an idea much bigger than the original began to take shape, starting with the title character. Kevin. Other than having CP we don’t have too much in common (except being a social oddity of course).


After having the main character and a general idea, I needed a premise and a villain.  I wanted to craft both at the same time because I love stories where the antagonist and protagonist are chasing the same goal. It seemed that with the premise, came the goal, and with the goal came the villain.  One building block made the other easier to find.  Once these things came together, the world around the characters began to reveal itself naturally.  There’s a lot more architectural work to be done, but the outline came out unscathed. Imagine that.

Some ideas decided to crawl out of my head in the shower.

Others came in the form of suggestions from fellow creators.  Ultimately, I think the most important lesson I learned is that creative inspiration comes to those who wait in want for it to arrive.  I don’t know if the story will do anything, but the process of its creation is always the best part. As a person obsessed with heroes and wonder, I don’t really see myself as a creator but rather a vessel for ideas to use as they see fit.

” Ideas come to us when we’re ready, but if we don’t act on them they will become the ideas of someone else.”

The reason this comic is rising to the surface at all is totally because I’m a selfish vessel for ideas.  I can’t stand the idea of not acting on their genius.

I am no genius, but I’m determined to a fault.  The trouble is my lovely, self-sabotaging ego is just as determined to ensure this comic never sees the light of day.  I find the defence against the ego is collaboration. If you have other creative people that depend on you, you’re much more likely to follow through.  At least that’s been the case for me thus far.  Being around people who are particularly encouraging is key.

The other thing that’s helped is sitting on the premise behind the story. What it means to me. Why I have to share it. What the story itself specifically lifts off my chest.

Don’t get me wrong; storytelling is eye-opening, mind twisting, heavy-handed and sometimes lonely.  But, it’s also generated a sense of both relief and purpose for me.  It’s almost as much a natural medication as it is a time-consuming battle with the ghost inside your head. Silly ego.  Tricks are for kids.

The last thing to remember is that I don’t know anything. This is a great place to start from, because any other desire beyond learning to be a better storyteller seems to get in the way.  It seems the only way to crack the code is by putting pen to paper, or forcing the sound of a key strike to drown out the other oddball in your head that says you’re not worthy of the stories you hold onto.

All the heroes and villains we love are strong for different reasons.  Maybe each of them represents apiece within us.  Either way, they’re not strong enough to exist on their own.  The only thing stronger than the hero of a story is the story itself.  If you have the courage to write the story, I guess that makes you the hero after all. 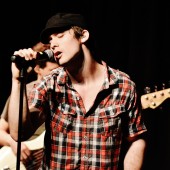 FIVE FOR CREATING with Craig Johnson

Some favourite characters save a writer from the block.. A story in two Acts. Act Two.